Let's Save the House of Bizet,

the House of Carmen

« O ma Carmen ! ma Carmen adorée »
Thus ends the opera, in this tragic and heartbroken scene.
Yes, we all know Carmen, this character that became a myth, this woman of Freedom and Love, this opera that became the most popular in the world.
But what do we know about his creator, Bizet? So little!
Do you know that he died exactly three months after the premiere of Carmen, at the age of 36 like Mozart ?
Do you know that his life was an incessant struggle to survive?
Do you know that the public and critics of the time received "Carmen" disdainfully, considering it even vulgar and not worthy to be performed before the audience of the Opéra-Comique?
But the great composers of his time saw more clearly. Brahms in Vienna was enthusiastic, Wagner applauded, and Tchaikovsky cried out in 1880 "this opera will be the most popular opera in the world." In a remarkable vision, he was right, only Bizet was no longer there.
Nowadays it continues to be the most played and translated opera in the world and many of you know it and others hum its tunes, just because they have become so universal.
The house, where Bizet spent wonderful moments and loved so much, where he wrote the 1.200 manuscript pages of Carmen's orchestration and where he ended his days in 1875, is now on sale.
Bizet, this genius of music deserves that we do not let it go to an anonymous owner. On the contrary, it must become universal patrimony, a place of memory dedicated to this composer of genius and a house of future for artists in residence. We owe him that!
Carmen, memory and future. This is our goal!
Bizet recognition and gratitude. Such is his due!
As a musician, as President of the CEM, I invite you to participate in the rescue of this House. It will be part of a major cultural, educational, scientific, tourist and economic project of the City of Bougival and the CEM, bringing together this Golden Triangle, the treasure of Bougival, which gathers the Villa of Pauline Garcia Viardot, the Datcha of Tourgueniev and the House of Bizet. Few places in the world can claim of having such geniuses united on the banks of a still protected Seine and one of the cradles of the Impressionists' movement. In this little perimeter, we have all Europe.
I count on you! We owe it to Bizet and also to Carmen!
Your generosity will be the foundations of a new Life for this house. The “Espace Carmen”, to be created in front of the House of Bizet, will become a grandiose and unique project which, thanks to you, will be possible to develop for the future generations. In defending this heritage and making it alive, we are therefore building a better future for generations to come.
Let us be thousands, millions! And share this information all around you!
Let us get involved in this movement for Beauty and Music. Be our Ambassadors!
Your participation is essential and I am sure that you will be proud to see your name inscribed on this wall of Gratitude to Georges Bizet.
What moves us is the preservation of an heritage, of Beauty and, in my case, it means also the recognition of Music. In other words, the preservation of Mankind!
Thank you!

SAUVONS LA MAISON DE BIZET, LA MAISON DE CARMEN
LET'S SAVE THE HOUSE OF CARMEN, THE HOUSE OF BIZET!
Please share this information and participate in the crowdfunding to SAVE THE HOUSE WHERE BIZET COMPOSED CARMEN AND DIED AT 36... WE OWE THIS TO HIM!!!
https://youtu.be/x_h24EMYnJY
www.dartagnans.fr/carmen
Publié par Unknown à jeudi, juin 22, 2017 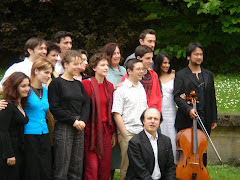 Music in ME (Music in Middle East)